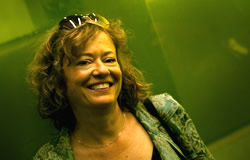 The New York Times writes ‘Lisa Moore, an Australian pianist long based in and around New York, has always been a natural, compelling storyteller’. TimeOut New York describes her as ‘the wonderfully lyrical pianist’ whereas The New Yorker refers to her as ‘New York’s queen of avant-garde piano’. Lisa Moore’s performances combine music and theatre with expressive and emotional power – whether in the delivery of the simplest song (using her voice), a solo recital, or a fiendish chamber score. Pitchfork writes “She’s the best kind of contemporary classical musician, one so fearsomely game that she inspires composers to offer her their most wildly unplayable ideas”.

Lisa Moore won the silver medal in the 1981 Rockefeller-Carnegie Hall International American Music Competition. She moved to New York City in 1985. In 1992 she won the Australian Music Center Sounds Australian award ‘best performance of an Australian work” for Stroke by Michael Smetanin. From 1992-2008 she was the founding pianist for the Bang On A Can All-Stars – New York’s electro-acoustic sextet and winner of the Musical America 2005 Ensemble of the Year Award.

As an artistic curator Lisa Moore produced Australia’s Canberra International Music Festival 2008 Sounds Alive ‘08 series, ‘importing’ artists from around the world for 10 days of concerts at the Street Theatre in Canberra.

Lisa Moore was born in Canberra in 1960 and raised in Australia and London (1971-73). She studied piano at the Sydney Conservatorium for 4 years from 1976-80 before transferring to the USA to complete her three music degrees. She is a graduate of the University of Illinois (BM), Eastman School of Music (MM), and SUNY Stonybrook (DMA). With an Alliance Française grant Moore spent a year (1982-83) in Paris with Yvonne Loriod-Messiaen before settling in New York City in 1985. Her past teachers include Gilbert Kalish, David Burge, Yvonne Loriod, Benjamin Kaplan, Albert Landa, Sonya Hanke, Alan Jenkins, Wilma McKeown, and Larry Sitsky. Lisa Moore is a Steinway artist. www.lisamoore.org