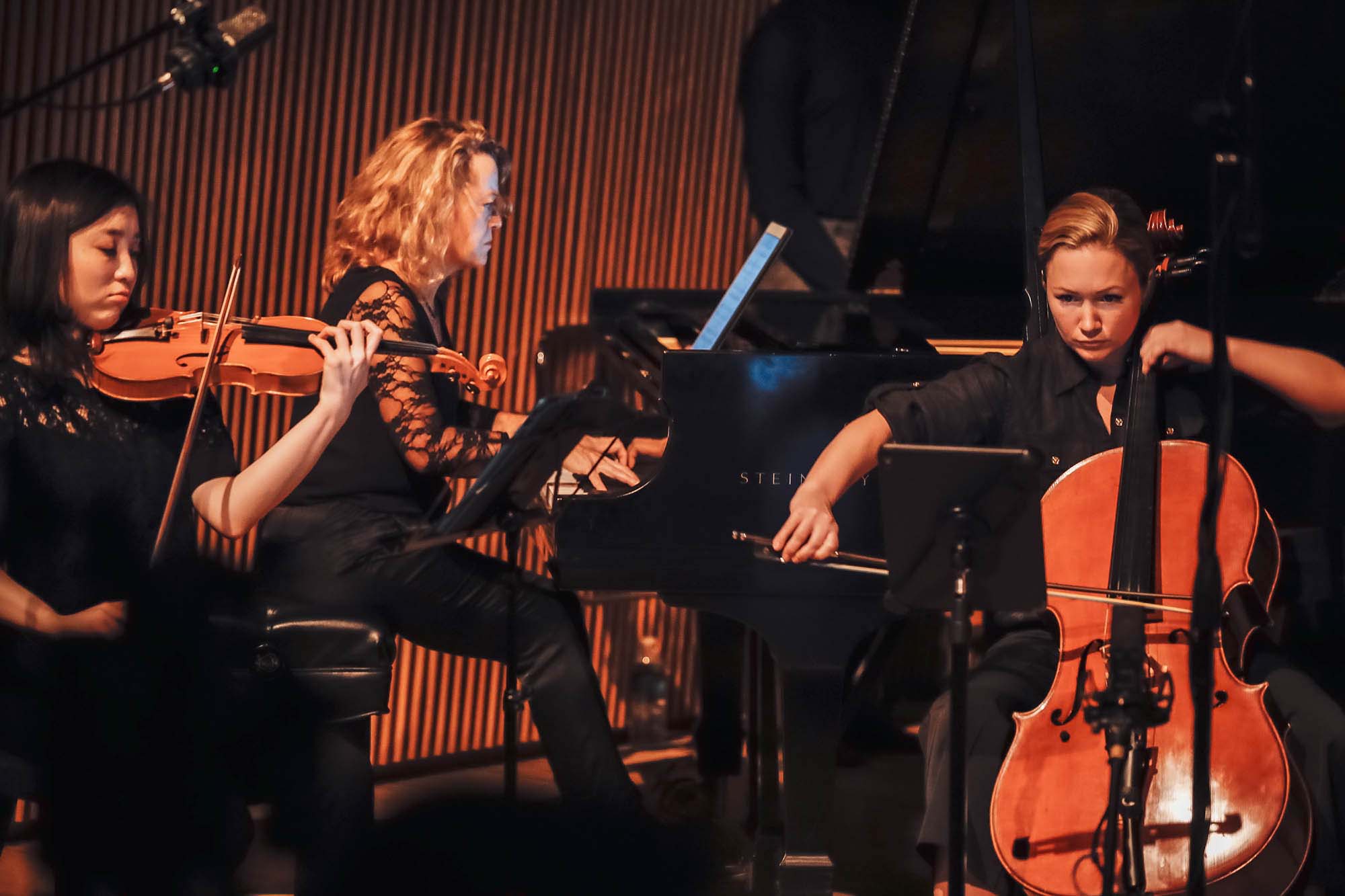 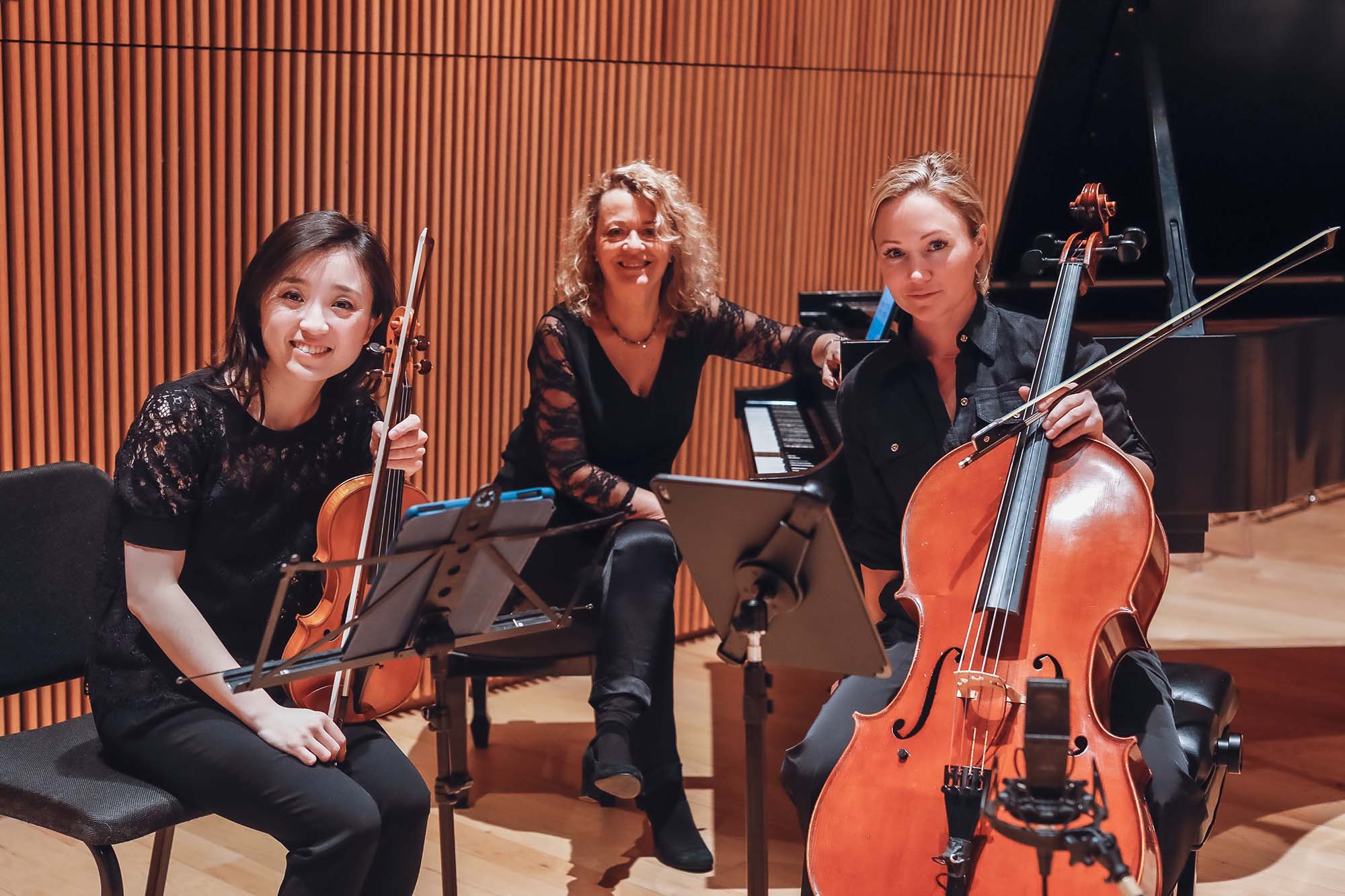 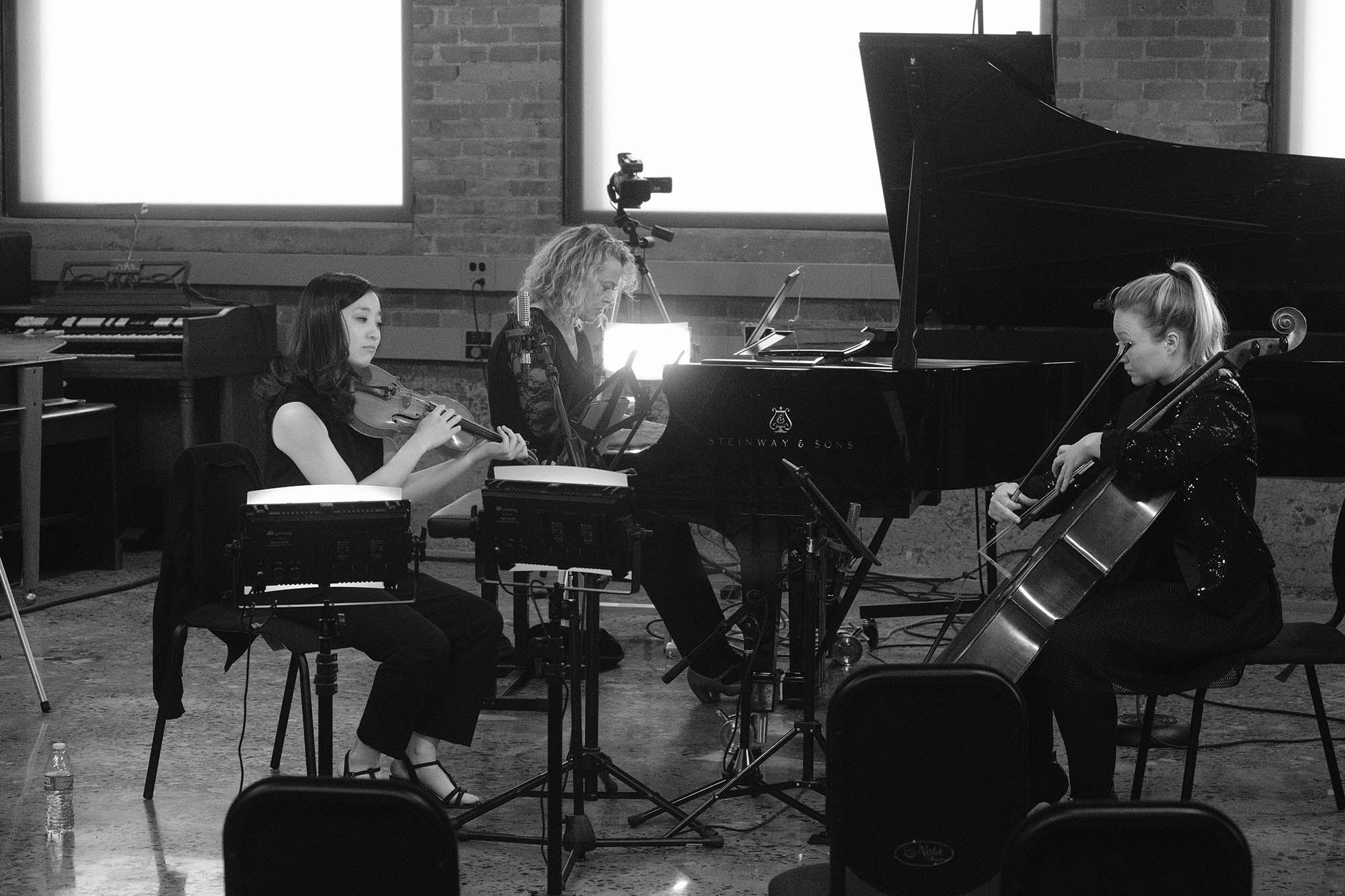 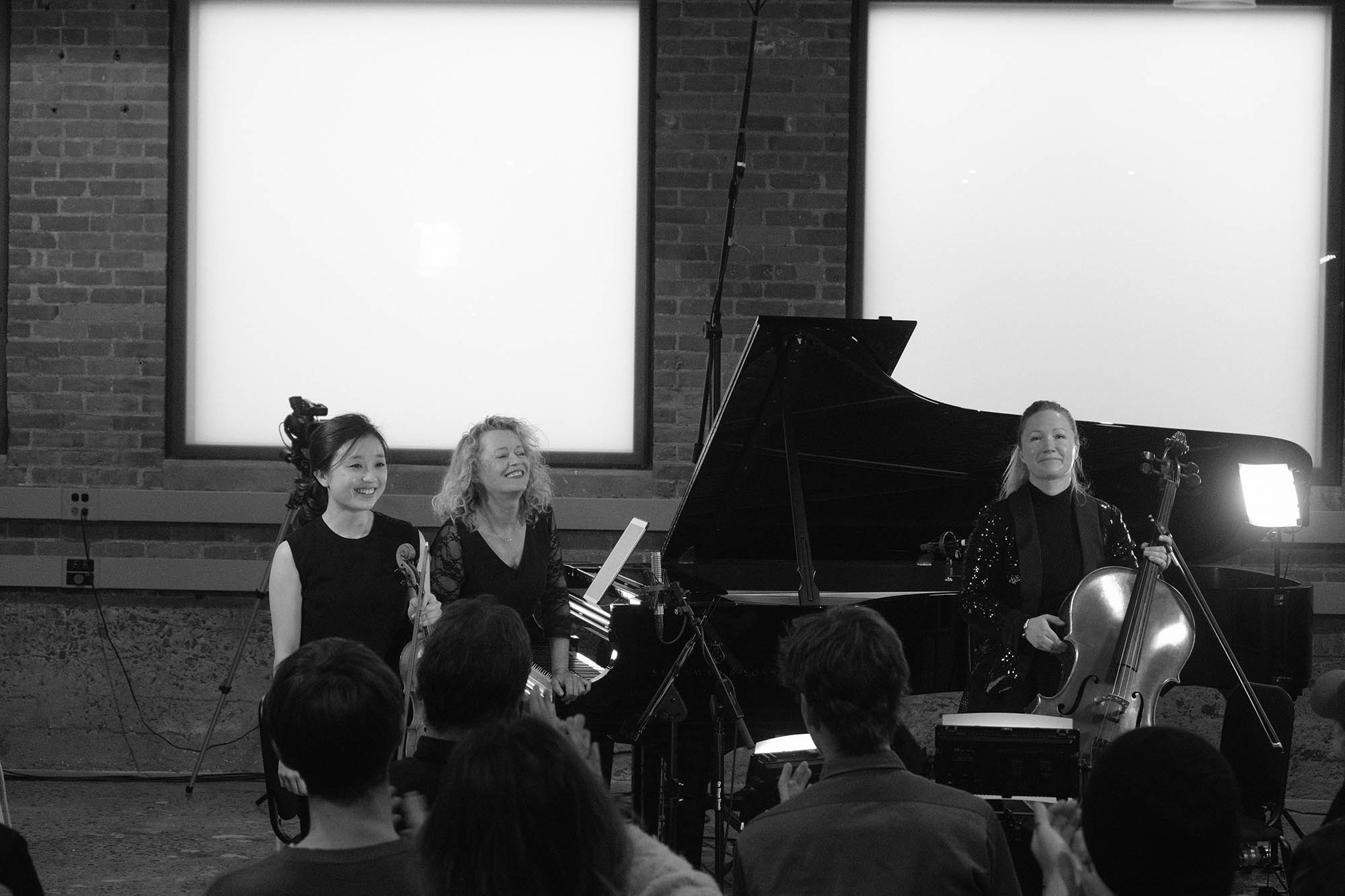 Mammoth Trio is a ‘piano trio’ I formed with two of my favorite musicians – violinist Elly Toyoda and cellist Ashley Bathgate. We work perfectly in sync – whether in rehearsal and on stage. Our combined energy is arguably unmatched – hence naming ourselves after mammoths – apart from the fact that neither of us is taller than 5’2″.

Please watch Mammoth Trio playing the ferociously divine and infamous Trio (1988) by Martin Bresnick recorded in a session with a live audience, in December 2021:

Mammoth Trio shares a daring passion for exploring new music while enjoying independent solo and chamber music careers – performing and recording diverse repertoire in a range of settings. Originally formed for a performance of Martin Bresnick’s masterpiece Trio (1992) at the MoMath Museum of Mathematics in New York City. Its origins began in 2010 as the dynamic commissioning cello and piano duo TwoSense – the “new music equivalent of a special ops team” (New York Magazine). Both Bang on a Can All-Stars alumni, cellist Ashley Bathgate and pianist Lisa Moore commissioned fifteen new works for TwoSense. They began collaborating with the virtuoso violinist Elly Toyoda in 2016. In early 2020 the trio were featured in the debut of Tales of Hopper with the Cherylyn Lavagnino Dance Company at the DiMenna Centre in NYC – a live music and dance representation of Edward Hopper’s paintings. “The Mammoths” were ensemble-in-residence for the 2021 Yale-Norfolk New Music Workshop. They most recently recorded David Lang’s NYC Ballet score ‘shade’ for Cantaloupe Music.

Cellist Ashley Bathgate has been described as an “eloquent new music interpreter” (New York Times) and “a glorious cellist” (Washington Post). She was a member of the Bang on a Can All-Stars from 2009-2019. Bathgate’s recordings can be found on Albany Records, Cantaloupe, Innova, La-La Land Records, Naxos, New Amsterdam, Nonesuch, Starkland and Uffda Records. Her solo albums include Stories For Ocean Shells – works by Kate Moore, ASH, a six-movement suite by the ‘composer collective’ Sleeping Giant, and 8 Track – multitrack works by Alex Weiser and Emily Cooley. Upcoming discs include a new rendition of Steve Reich’s Cello Counterpoint, and Michael Gordon’s House Music, which she premiered at the 2018 Cello Biennale in Amsterdam. Originally from Saratoga Springs, NY, Bathgate studied with Rudolf Doblin, Ann Alton (Skidmore), Luis Garcia-Renart (Bard) and Aldo Parisot (Yale).

A native of Osaka, Japan, violinist Elly Toyoda has performed in festivals throughout Asia, Europe, and North America. She was awarded the Prix de Musique Contemporaine by the Fontainebleau School and has appeared on programs at National Sawdust, (le) Poisson Rouge, and the Elb Philharmonie in Germany. Toyoda has recorded for Cantaloupe Music and premiered new works through the Norfolk Chamber Music Festival, Lucerne Festival, Massachusetts International Festival of the Arts, and Talis Festival. Recently Toyoda has been performing with Eighth Blackbird, the 4-time Grammy award-winning contemporary music ensemble. She holds music degrees from Oberlin Conservatory, the Yale School of Music and Rutgers University. Her teachers include Marilyn McDonald (Oberlin), Syoko Aki (Yale), and Yura Lee (Rutgers). Dr. Toyoda is Visiting Assistant Professor of Violin at the Sunderman Conservatory of Music at Gettysburg College.

Lisa Moore is a multifaceted Australian-born pianist, recording artist, and avid collaborator. She has released 11 solo CDs as well as over thirty collaborative discs – in works ranging from Leoš Janáček to Philip Glass and Julia Wolfe. The founding pianist for the Bang On A Can All-Stars from 1992-2008, she has been described in the The New Yorker as ‘visionary’ and ‘New York’s queen of the avant-garde piano’. Based in New York City since 1985, Moore has performed throughout the globe on some of the world’s greatest stages – Carnegie Hall, Lincoln Center, Sydney Opera House, La Scala, Royal Albert Hall, and the Musikverein. In the 2022 season Cantaloupe Music will release her second disc of solo works by Frederic Rzewski.